Why take our word for how unforgettable your hunt will be when you can take it from our satisfied customers? These quotes are from those who have taken home their trophy whitetail deer! Check them out and join us at one of the best whitetail hunting ranches in Ohio. Because if you do not want to take our word for it, maybe our several satisfied customers will change your mind.

I wanted to take a minute and thank you for making the trip with my daughter a memory of a lifetime! You added just the right personal touch combined with professionalism to our experience and gave my daughter Amanda the best graduation/birthday gift I could have ever imagined! Even though this was the first out of state hunting trip she and I have ever taken, I truly believe that I will never match the experience of Hidden Hollow Whitetail Ranch in my lifetime. I am glad that you took the time to call me back after my initial e-mail to your website….the conversation you and I had at that very moment made my decision to book with you a no-brainer. Thank you very much! 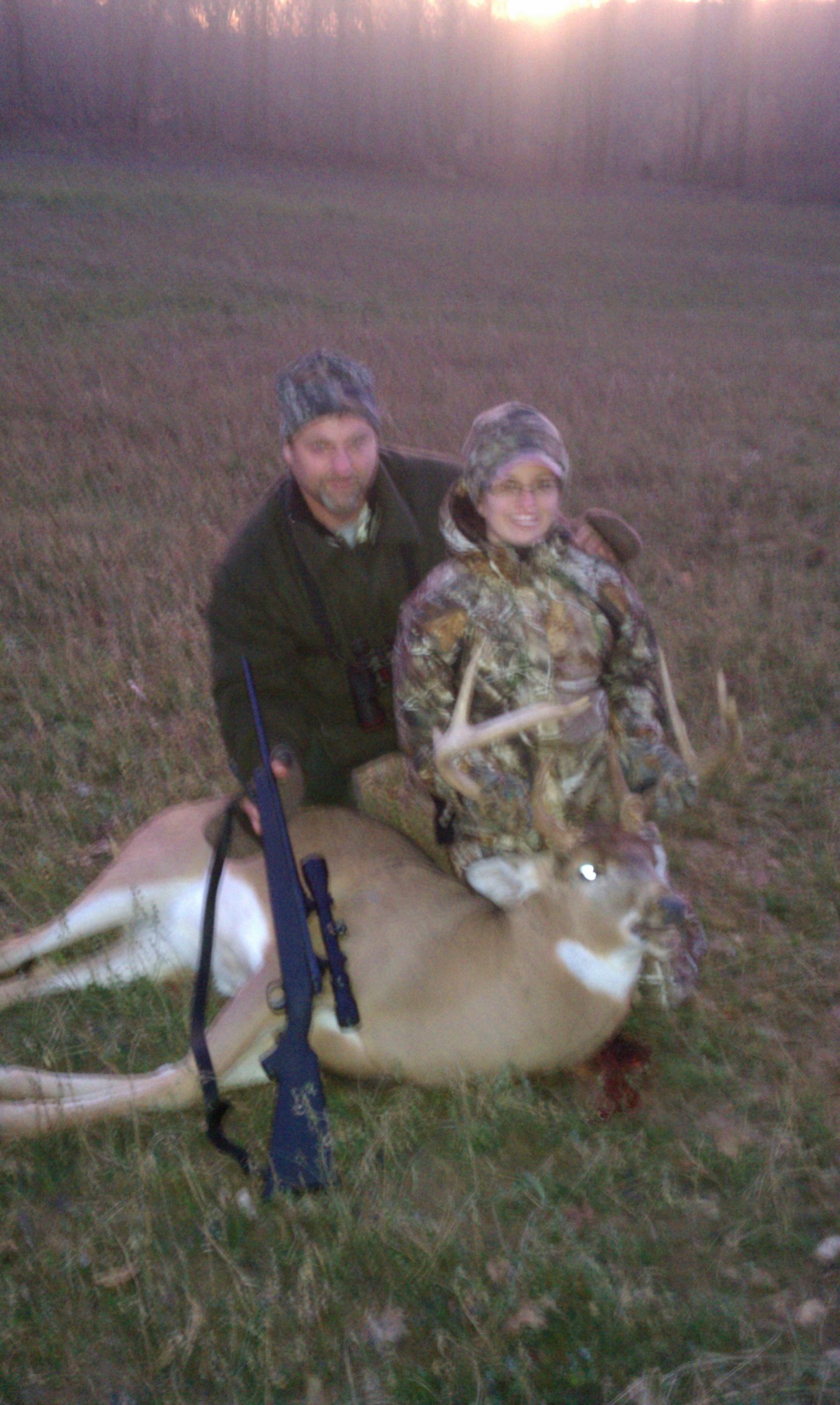 Mark and Amanda
I would like to start by saying ”AMAZING!!!” I’VE NEVER SEEN THE CALIBER OF WHITETAIL ANYWHERE LIKE I'VE SEEN AT HIDDEN HOLLOW WHITETAIL RANCH. Not on advertisements, commercials or TV shows. Rob's operation is 1st class all the way. He wasn’t joking when he told me I would be amazed at the size of the whitetail at his ranch. In all seriousness I was a little skeptical all the way up until the morning of the hunt. The terrain, woodlots. and crop fields at Rob's ranch are the perfect habitat for growing GIANT WHITETAILS! The hunt was heart pounding everyday. I saw several different bucks each day I was there. Fortunately, I was able to harvest my dream buck on my last day there. It was a difficult hunt but Rob guided it perfectly. He really knows whitetail deer! I highly recommend Hidden Hollow Whitetail Ranch to anyone, young or old. WHAT AN AMAZING EXPERIENCE!! 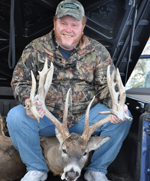 Butch
My hunt at Hidden Hollow Ranch was amazing! I still can’t believe the first buck I’ve ever got was a 182” class buck. My dad says that’s a strong accomplishment for an 11-year-old. All of my friends are jealous of such a big buck. I still can’t get over all the huge bucks we saw. Even the smaller bucks we saw looked like giants to my dad and me. Even though y’all are in Ohio, the southern hospitality we were given has made us decide to adopt all of you into our family! Everyone in the hunt was super nice and very patient and helpful. The food was outstanding and the bed and breakfast stay made us feel like home. I’m saving my money so we can come back soon. Again, I want to thank you for the hunt of a lifetime. I will never forget Hidden Hollow Ranch! 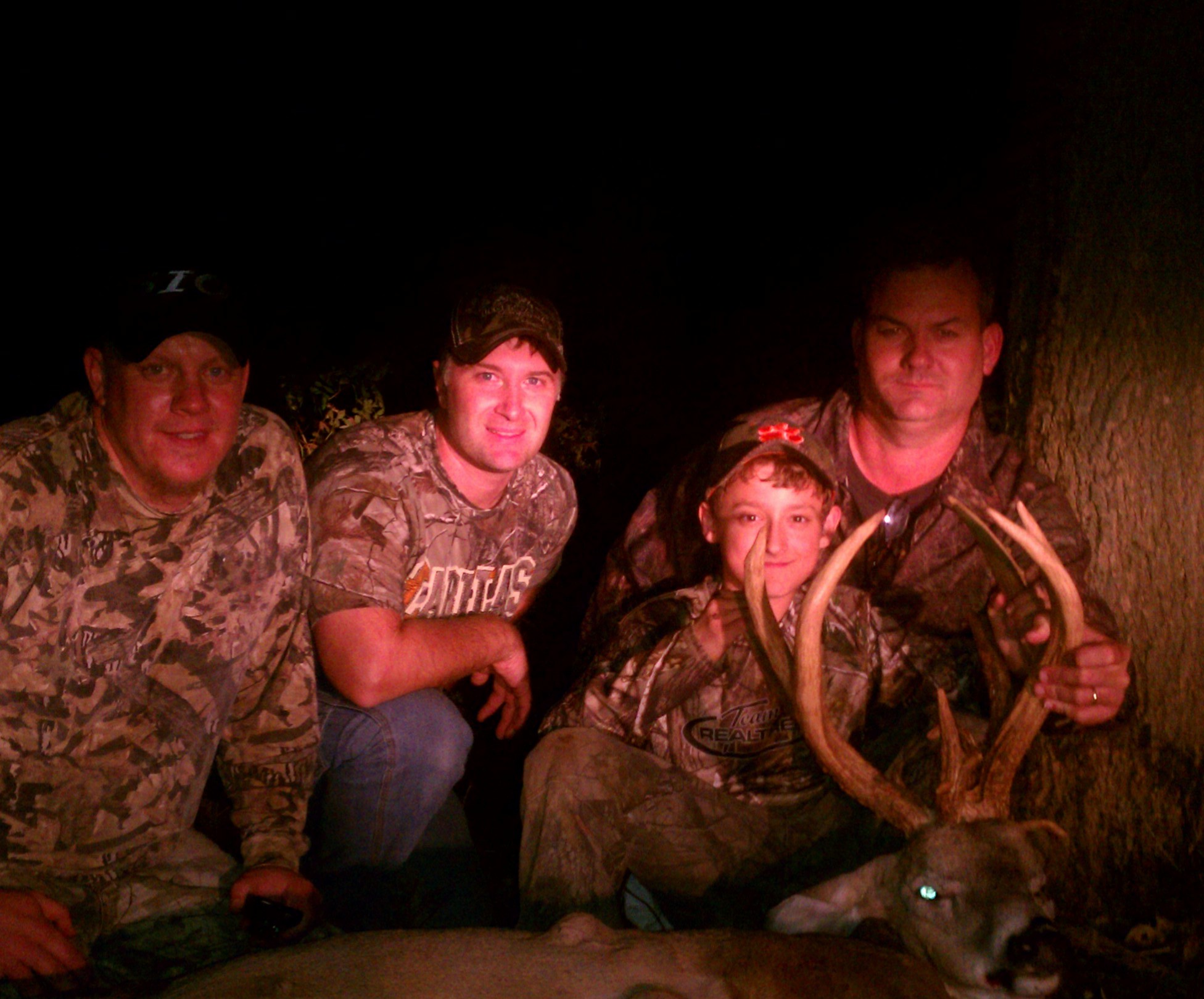 Eddie-Ramzie
I would like to take the time to thank Rob for an amazing hunt this past year. I was able to take a giant whitetail on my third day of the hunt. Rob runs a very professional and personable Ranch. I had a blast every day of my hunt. I was able to spend enough time with Rob to see that he is a class act. I can’t wait to come back to Hidden Hollow for my next hunt. 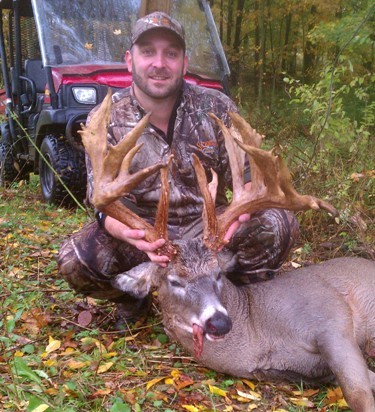 Corwayne
Just a few lines of appreciation to my friend Rob Fiesler, owner and guide of Hidden Hollow Whitetail Ranch. This was one of the greatest hunts I’ve ever been on. This place has plenty of shooter bucks with great genetics and plenty of mass in the antlers. There are tremendous hills and valleys, this place is truly a great place to have a hunt of a lifetime. Thanks so much, I will be back.

Roger
When my brother and I went hunting at Hidden Hollow Whitetail Ranch, we had a great time. It was my first time ever hunting and it made the trip even more enjoyable. When we got to see all the deer it was really exciting. To be able to go hunting there was a great pleasure. Not only was it fun to hunt with you guys but when we were there, you made it comfortable and fun. I enjoyed the trip to Hidden Hollow Whitetail Ranch and would love to do it again someday.

Megan Ritts
After hunting at the Hidden Hollow Whitetail Ranch I experienced and learned a lot about hunting. Once a person takes part in a hunt like this, I believe they will love to come back to do it again. Learning what it takes to build a whitetail ranch was very interesting to me. The guy who helped us get a chance to harvest a deer was great as well. I thank you for letting us come down and experience the great hunt and would love to do it again. Thank you.

Shane Ritts
I could not have imagined a better experience had I tried my hardest. Rob sought to provide a hunting experience beyond my wildest dreams and imagination. And that's exactly what I got. Y'all know what it’s like sitting in the stand, at dawn or dusk, layered under a zillion clothes and still freezing only to see a doe or spike. Taking a doe, ok, well I like the meat, but I’ve always hoped for that trophy buck. Y’all with me, right? Anyway, while closing out the morning, we spotted a beast. He was standing stately in the woods and I experienced an adrenaline rush just looking at him. I drew up my gun and well, ok honestly on the second shot, went dead center between the shoulder blades, center of his chest. He dropped! Approaching was one of the greatest thrills of my life. That buck just got bigger and bigger as I approached. It was like the twilight zone there for a minute. I could hardly believe how massive and perfect he was. My first buck! I don’t think they get that big in Alabama so I’m sure I will return to Rob, as I’ll never top this day at home. From the heated blinds to the home-cooked meals, it was like a second honeymoon for me. Oh, and by the way, my buck was bigger than my husband's that he shot the first day. Thanks so much, Rob, memories from Hidden Hollow Ranch echo in my heart. 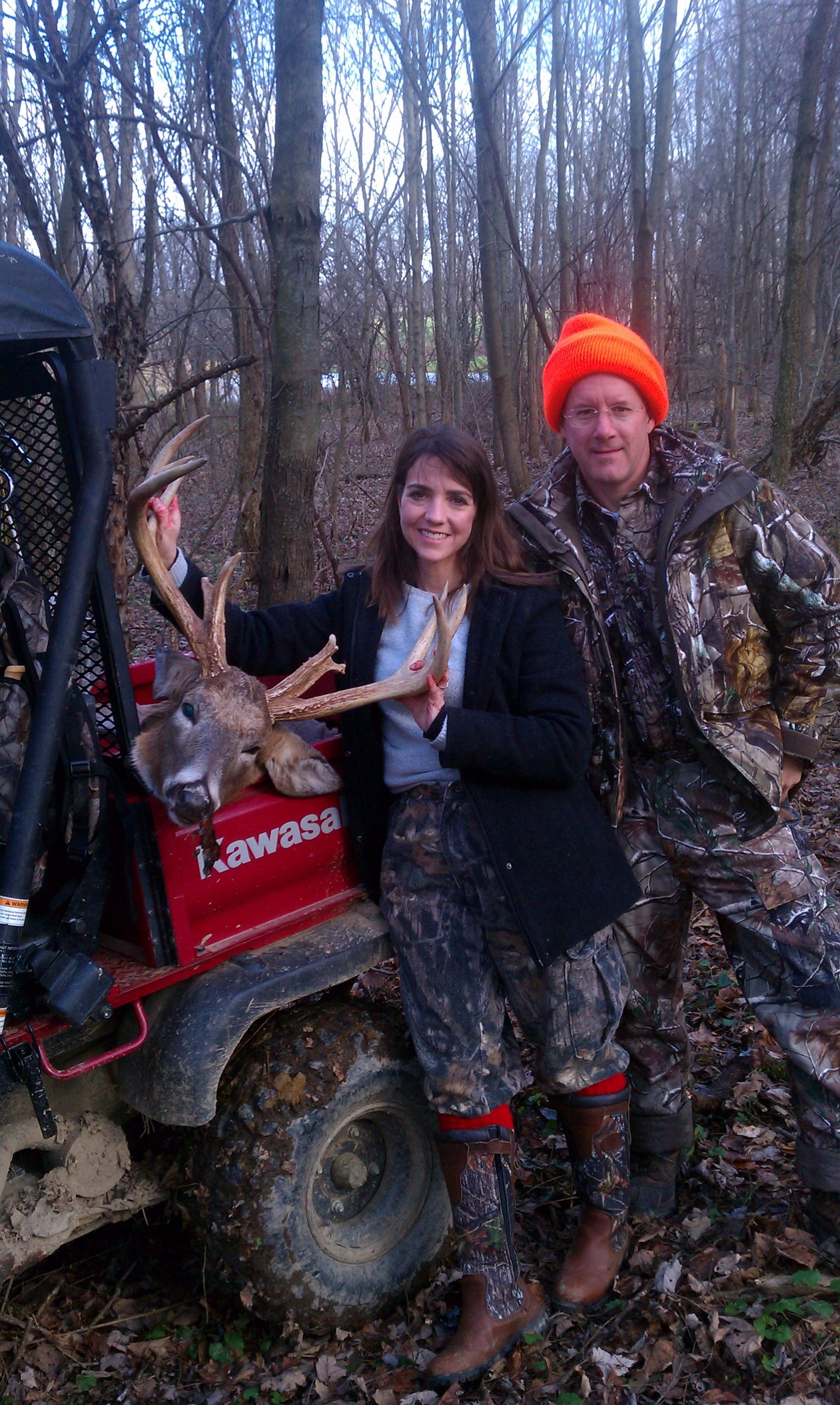 Jenn and Tony
Thank you for letting my sister, dad, and myself hunt on your preserve. I had a lot of fun and made many memories. I almost got 2 shots on nice bucks but I just couldn’t stop shaking. I was so full of excitement when I saw them I couldn’t pull the trigger. I will never forget when the BIG BUCK was running straight at our blind. It looked like a buck in the movie ”Open Season”. It was awesome! My sister shot a really nice buck and it will be going on our family room wall! Thanks again for letting us hunt on your preserve. 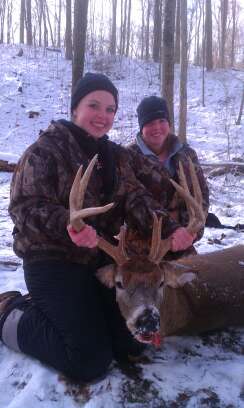 Megan and Amme
I would like to start by saying this hunting experience was far more exciting than I could have ever imagined. Rob explained what everything was about and what I could expect, but by no means did I think a “City Girl” like me could ever enjoy something this much. I truly understand now why my husband is addicted to hunting. Rob's operation is second to none in my book. The hot home-cooked meals, heated hunting blinds, comfortable lodging, and the one on one time with him during the hunt and after the hunt made this a yearly hunt for me for sure! The property at Rob’s ranch is the most scenic property I’ve seen. Believe me, I’ve seen a lot with my husband. This was a hunt that I will always cherish. To have the opportunity to take one of these magnificent animals is truly an experience of a lifetime. I saw plenty more deer while I was there and plan on hunting there in Fall 2011. Thank you for the hunt of a lifetime Rob, I’ll see you in November 2011 for another great hunt I’m sure.

Mary
Hidden Hollow Whitetail Ranch is the best ranch I have ever been to. Rob Fiesler the owner takes it personal to make sure you get the trophy deer you want. I’m a disabled veteran but that didn’t matter to Hidden Hollow owner Rob Fiesler who goes out of his way to make sure you are equipped with everything you need to be comfortable and to have a successful hunt. Their prices are very reasonable and Rob will work with you to get the hunt you want. The hospitality and friendship that was shown on the hunt by Hidden Hollow Whitetail Ranch are second to none. I would recommend the hunt to any hunter no matter what disability you have. If I can ever be of service as a reference, please feel free to contact me. Again, I want to sincerely thank you again for the opportunity to hunt and bag such a magnificent animal, and for the experience of a lifetime.

T. Cobb
I’m sending you this letter as a small token of my appreciation for all you did for us during our hunt. I want to start by saying Hidden Hollow Whitetail Ranch is FOR REAL!!! I’ve been on other hunts in my life & never has anyone taken it as personal as you did Rob. You are a true class act! This hunt was by far my most memorable hunt ever. Your personal touch on everything from your guiding to the meals you made, right down to all the extras you did for us during our stay will never be forgotten. Not to mention the deer at your ranch were incredible, absolute giant whitetails. This was truly more than a hunt, it became a relationship. We are coming back in the fall of 2011 & I will highly recommend your operation to anyone looking for a hunt of a lifetime! 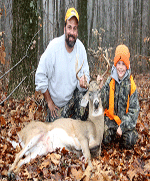 Book Your Private Hunt At Our Whitetail Hunting Ranches In Ohio!

After reading our clients’ fantastic testimonials, are you ready to book your hunt of a lifetime? Hidden Hollow has a variety of guided hunting packages to fit your experience level and needs! Track down a trophy buck this year at the best of whitetail hunting ranches !  Don’t wait any longer, schedule with us below!

Get Social with Hidden Hollow